Identification: In 1968-9 Christo was in contact with John Kaldor of Universal Textiles (Australia) Ltd. regarding a proposal to wrap a section of Sydney coastline.

John Kaldor became the contact and main player in the project at the Australian end.  He frequently visited the site, posed many questions and logistical queries, provided extensive photographic references, contacted possible sponsors, workers, engineers, government bodies, media, airlines, suppliers and whatever & whoever needed to be involved to bring the idea to fruition.

From the photographs and measurements provided Christo produced initial drawings and scale models.  All from the USA with much writing to and fro.

This gelatin silver photograph of the area to be wrapped has tape, cloth and cotton thread added to the surface, using staples, to give an indication of the type of effect they hoped to achieved.  Another similar photograph shows the same view with transparent plastic wrapping.  Several of these are produced for each project.

Whilst Christo and Jeanne-Claude collaborated on every project undertaken since the day they met Jeanne-Claude never produced any of the drawings or models, that was strictly the domain of Christo.

The model above was created to demonstrate more realistically the visuality of the project once finished.  Whilst the topography of the area isn’t exact it does give the viewer a good indication of the size and overall effect.

All major installations by Christo and Jeanne-Claude take many years to come to fruition so they are never planned to coincide with any particular date or event.  They work together without outside influence, never collaboratively with other artists and are not connected with any movement – be it political or propaganda based, artistic body or recognised style.  They have created their own.  Each of their projects is self-financed and as such they maintain a freedom to do as they please, when they please, solely dependent on approvals and permissions being granted by the relevant authorities in the locations they choose. 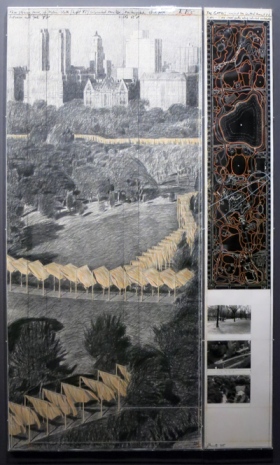 As an example, their project The Gates, saffron yellow arches that spanned 37 kilometres in Central Park, NY, during February 2005, took 25 years to come to fruition after having been refused by numerous administrations since its conception in 1979.  This was the last project completed together before Jeanne-Claude passed away in 2009.

As all their installations are designed to be temporary they can only be seen during their short exhibition time which may be anywhere from a few hours, as in the case of Wall of Oil Barrels (Sept 1961), or as long as 10 weeks for the Australian Wrapped Coast (Oct-Dec 1969).  However, extensive photographic references of all the projects are available along with collections of concept drawings, models, correspondence, technical drawings, material samples, etc..

Describe this art work and how it works.  This huge undertaking at Little Bay, covered a section of high cliff sea frontage around 15 kilometres southeast of Sydney centre.  The area chosen, owned privately by Prince Henry Hospital, is 2.5 kilometres long, 46 to 244 metres wide, 26 metres high on the northern end, reducing to sea level and sandy beach on the south side. The wrapped surface was 90,000 square metres, equating to 1 million square feet (as measurements were still Imperial at that time).

It was constructed using a synthetic woven hessian style erosion-control plastic, usually manufactured for agricultural purposes.  56.3 kilometres of 1.5cm diameter polypropylene rope was used to secure the fabric to the rocks and cliff face.

Above: Telegram informing Christo permission granted for the project, sample of rope and synthetic fabric.

Above: Close-up of telegram sent from USA to Christo who was in Antwerp at the time.

Ramset guns fired 25,000 charges of fasteners, threaded studs and clips to secure the rope to the rocks.  At the conclusion, all materials were removed and recycled, which is the norm with these projects, and the area was returned to its natural state.  There is much correspondence regarding the initial material cost and the scrap value for recycling after completion.  From what I can gauge it seems that they recouped around 35% of the initial outlay by selling the materials for reuse later.  Whoever thought recycling was a new concept?

Whilst it would appear to be a two-dimensional artwork, in that the fabric is flat with a slick surface and has no dimensionality to it at all, it covers a three-dimensional space and is a materials led creation.  Both Christo and Jeanne-Claude have always been quick to state they are not conceptual artists, they want to see all their plans come to completion.  With regard to the wrapping their website states:

This project is very typical of their style and also their working method.

Huge armies of people are required to work on these installations and in this case the University of NSW, amongst others, provided manpower including both skilled and unskilled labour.  As can be seen from the photo Christo even detailed how many bodies would be required and in what capacity.

The University was more than enthusiastic to participate and a rousing letter to their various societies was produced encouraging everyone to take part.  Unfortunately my photograph of this unique document, taken through glass, is not good enough to read but it is such a fabulous writing that I’ve typed it in full below. (Ref 2)

The Biggest Plastic Happening in the World

The University of N.S.W., is, by a stroke of luck, located very close to the site of the biggest wrap-up so far in the history of mankind.

Universal Textiles (Aust.) Ltd., sponsors of the Alcorso-Sekers Sculpture Scholarship, will sponsor the artist (plastic wrapping wizzard) Christo, to come out to Sydney in October and with the permission of the Hospital Board of The Prince Henry Hospital, he will wrap up part of the coastline at Little Bay and tie up the parcel with rope.

Your society may be selected to participate in providing the “Plastic Men” to help Christo in the two week wrap-up in October, and/or, the unwrapping a month later.

Grandalf, Wizzard of N.S.W. University, has been called in to help Christo and Universal Textiles (Aust.) Ltd., to provide significant plastic happenings at the University and to lead some small-scale plastic guerilla warfare in the near future.

Mr. John Kaldor of Universal Textiles, Administrator of the Alcorso-Sekers Scholarship, will be calling for tenders from our various University Societies, particularly those connected with applied technology, mountaineering, geology, etc.

The chosen “Plastic Men” will be provided with buttons and other insignia of identity, whilst working on the world’s biggest wrap-up.

Naturally enough, this latest work of art, (which may well temporarily displace the Opera House as world art stirrer) will be covered internationally in all sorts of mass media: “Life” magazine, American T.V. Networks, a film to be made by Universal Pictures and a book on the wrap-up to be published by November.

Most of the materials are being donated in various ways, as this is not exactly a “square commercial undertaking”, nor is it exactly accepted as a work of art by the usual bourgeois art patrons.

Keeping exams in mind – wrap in October, unwrap in December – you are invited to attend a small plastic wrapping of the Vice-Chancellor’s fountain, on Friday, July 4th, at lunchtime, at which the Wizzard will be Master of Ceremonies, Mr. Kaldor will be in attendance and we hope, Professor Fink.  On this occasion the Project will be announced and your participation invited.

Be Prepared – call your committee together quickly before Friday and rush in your offer of labour for the two-week wrap-up.

Refreshments provided and daily bus to Little Bay and return.

Remember, the eyes of the world will be on you, there may not be another opportunity like this in your lifetime.

Plastic workers of the world, the revolution awaits you.

So, why did Christo and Jeanne-Claude wrap the Sydney coastline?  The answer is simple.  Because they could.  They always wrap areas where there is a large population nearby, they are designed to be transitory and  for the public to enjoy, and these installations do draw the crowds.  The Gates, in Central Park, NY, kept up for only 16 days, brought thousands of foreigners to the city and boosted the city’s economy by over US$250 million.

Wrapped Coast, under the supervision of Ninian Melville, a retired major in the Army Corps of Engineers, took 17,000 manpower hours to build, over a four week period.  Experts included 15 professional mountain climbers, numerous architects  and art students and over 100 other workers and the whole project brought the wider community together, united in seeing this vision unfurl.  Over the 10 week period the white material billowed and ballooned, a white shimmering surface transforming the terrain and landscape as the brilliance of the early-summer sun beat down.

Images showing the progress and completion of the project can be viewed at http://www.christojeanneclaude.net/projects/wrapped-coast#.UsJRkrSd9eE

All other photographs taken by myself in the Christo section of the Enraptured exhibition at Casula Powerhouse Arts Centre, 1 Powerhouse Road, Casula, NSW. 22nd December 2013.  With permission to photograph and reproduce here.  This event exhibits items from the John Kaldor Family Collection and is a touring exhibition by the AGNSW, showing at this venue 7/12/13 – 27/1/14.

Much information was gathered by reading the correspondence in the cabinets at the exhibition.

I'm a passionate printmaker, paper-maker and a poor sketcher (which I'm working to improve). I've stitched from early childhood and am a perpetual student, loving learning and participating in everything creative.
View all posts by Claire B →
This entry was posted in Assignment 4: Contextual Studies, Project 2, Textiles 1: Exploring Ideas and tagged Christo, Christo and Jeanne-Claude, EI-P4-P2-S2, Jeanne-Claude, John Kaldor, John Kaldor of Universal Textiles, Wrapped Coast. Bookmark the permalink.