Working with inkjet printers ….. and other printing techniques.

I scanned some sections of the dragonfly piece I made in workshop 7.

These were then re-sized to A4 and printed on to fabric. 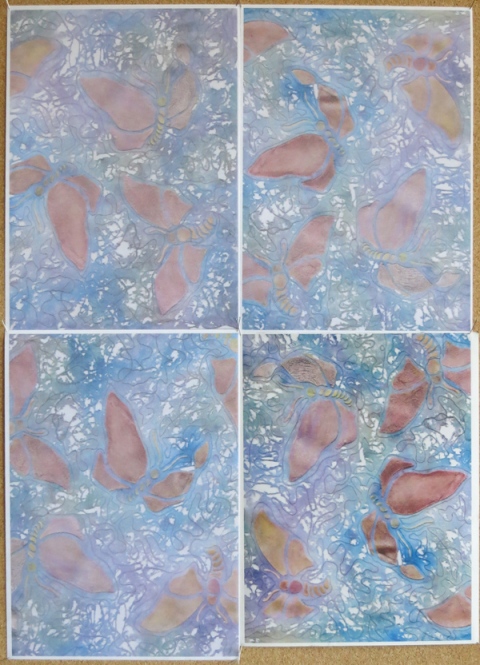 The same prints with the white carrier sheet removed.  These have been mounted forward from the corkboard so the print colour can be seen more easily.  Working with layering will come in the next stage.

I took my husband and the camera on an outing to Sydney last week searching for lines, grids and reflections fitting with the project theme.

Some of the tall buildings had amazing window reflections from others across the intersections.  This one in particular I thought was stunning.  More of these will be posted in Stage 4.

I zoomed in and rotated the picture.

What an incredible image.  It reminds me so much of my grid in workshop 3.

Again, it was resized to A4 and printed on silk organza on a standard setting.

The backing sheet has been removed and it is sitting around 2.5cm forward from the white paper behind, hence the shadow.

These next samples may or may not be accepted as part of this course and I’m sure my tutor will advise if they can be sent for assessment.  As I enjoyed the screen printing in assignment 2 I joined a local printing class.  This term I have been learning solar-plate printing.  Whilst I was taught the technique and used the equipment and oil paints supplied in the course, the designs, colour choices and outcomes are my own.

I’ve named this design (or lack thereof) Confusion.  I started with some basic mark making on acetate using black Indian ink with different implements – brush, twig, pen nib.  I then added black fibre-tipped marker pens and scratched back into sections using a stylus.

The design was transferred to a solar-plate using a UV light.  The plate was then washed quickly to reveal the etched sections.

Once it was dried I was ready to print.

Above left: plain black print on BFK Reeves 250gsm paper.  Right: green print on dirty plate (remainder of black left on plate) on crinkle Lutradur Crash.  This was printed twice as the oil paints did not adhere well to the synthetic textural surface.

These prints are identical but the papers are different.  Left: white 220gsm paper – unknown make. A mix of pthalo blue and black was made and applied to the plate. A very diluted mix of yellow and plate oil was applied with a roller over the whole surface. Finally a thick red oil paint was rolled over the top.  The red adheres to the areas where the oily yellow has not grabbed (terrible terminology but it’s very had to explain).  Right: BFK Reeves 250gsm paper using the same technique and colours.

A collage was made using part of a circular design I drew in my previous course, an adaptation of some of my earlier sketchbook work in this course, a silhouette of a cyclist and some of the fabric I used in my stitched grid.  An acetate image was taken, which reversed the design, and then it was printed (which then corrected the orientation). 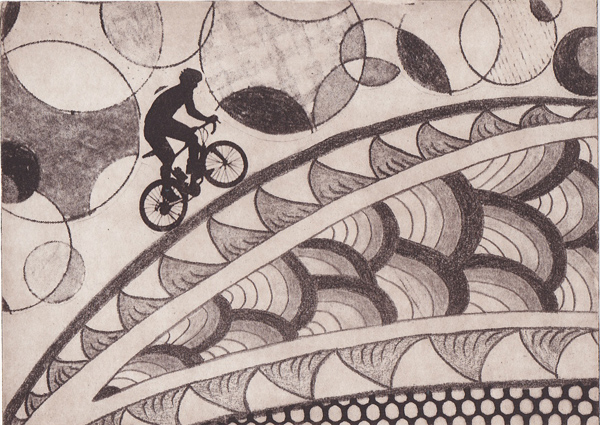 It was fine but I wasn’t thrilled.

So I decided to cut the solar-plate up into smaller sections and see the effects.  Notice how the shortening of the image has given the illusion of a much steeper incline.  I feel this size, with the cyclist focal point being to the top right, works much better.

Even better than that are the results from the other plate sections.

These two have been printed on to one page as a split design.  Blue/black ink was applied from the base up with yellow from the top, mixing to a dirty grey green.  As an abstract design I feel this has worked very well.  Have you noticed it has also been rotated 180 degrees?

How does this fit into Reveal & Conceal?  Perhaps it doesn’t but this part of the course is concentrating on printing so I feel my experimentation, evolving a design and changing the whole meaning from concept to final outcome are valid.

When the cyclist was in the picture there was a fairly clear message but now the plate has been fractured it is up to the viewer to interpret the outcome as they see fit. 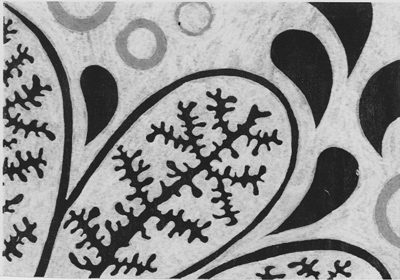 Once again I’ve taken a design from my previous course A Creative Approach and used it for another purpose.  Above is a scan of the acetate so the printing will be in the reverse.

As you can see from the acetate picture the plate has a lot of ‘interference’ surrounding the image and this gives a lovely dirty speckled look to the background.  A yellow print was initially laid down, the paper was kept damp whilst preparing the next layer, the plate was cleaned and blue/black was applied over the top with a 180 degree rotation.

This is similar to the one above but shows more complexity in the layers.  This is a double ghost print.

The solar plate is re-inked for each individual print.  A ghost is when a second print is taken without the plate being re-inked.

So, above, I have the yellow as a ghost print done straight after the initial darker print above it.  Then the blue/black was applied to the first print and ‘ghosted’ on to this one as well.  Of course, this second ghost has the added interest of whatever ink had been picked up from the first over-printing.  Does that make sense?  So it is a ghost, on top of a ghost, with ink pick-up from the initial print.  Good luck deciphering that!!

This image demonstrates Reveal & Conceal well with the layering and slightly misaligned overlay bringing depth to the piece.

The excellent thing with this type of paper is that it can be stitched into.  I’ve got several more prints and some stitching as an enhancement is definitely on the cards.

I'm a passionate printmaker, paper-maker and a poor sketcher (which I'm working to improve). I've stitched from early childhood and am a perpetual student, loving learning and participating in everything creative.
View all posts by Claire B →
This entry was posted in Assignment 3: Reveal & Conceal, Textiles 1: Exploring Ideas and tagged EI-P3-S2, inkjet printing, solar plate printing. Bookmark the permalink.