I’ve never been great at photography and now that I need to do so much it seems like the time to improve.  My quest started several weeks ago during my visit to Cockatoo Island.  I’m finding that my new interest in camera settings, coupled with the few tips about shutter speeds and depth of shots a friend has been telling me, has awakened a new ‘eye’ for detail.

Just like painting or drawing, the more you do the more you see and understand.  Today, while sorting through my recent shots, I came up with a couple of interesting ones.

The crane is right in front of me just behind the building roof on Cockatoo Island, but Centrepoint tower is in the middle of Sydney CBD across the water.  As first glance it really does look as though the piece on the end of the cable is some kind of large machine part being slowly lifted into place, not the tallest building in Sydney several kilometres away.

I particularly like the change in scale throughout the photo – notice the ‘tiny’ crane on the roof of one of the buildings to the right and the fact that it is fairly indistinct but still just about recognisable once you’ve spotted it.  The crane in the foreground is wonderfully sharp and the raised arm is clearly the dominating feature, showcasing every strut in high-definition from base to tip.

The camera was set on Landscape and this has given a much deeper field of focus than if it had been on Auto. 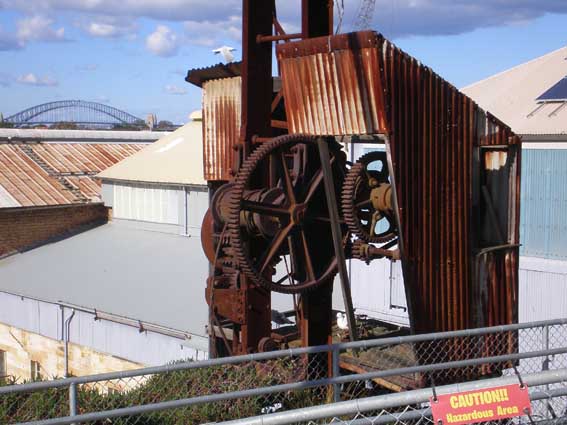 I took several photos of this rusted machine, some fairly close up and others concentrating on smaller specific areas.  The machine was only a few metres away from me whereas, again, Sydney Harbour Bridge was across the water several kilometres away.

How many pictures have we all seen of The Bridge?  Hundreds?  Thousands?  It is reproduced everywhere and always to its best advantage.  Here I have shown it as the secondary point of interest, almost as an afterthought.

I see Sydney Harbour Bridge as a monumental engineering success, a huge tourist drawcard, a major thoroughfare and an aesthetically pleasing addition to our city, but look what I have captured.  It looks so small, so insignificant,  so unremarkable, so …. inconsequential.

Again, the camera was set to Landscape.  No Photoshop enhancements have been made to these pictures, I’m enjoying them just as they were taken.

I'm a passionate printmaker, paper-maker and a poor sketcher (which I'm working to improve). I've stitched from early childhood and am a perpetual student, loving learning and participating in everything creative.
View all posts by Claire B →
This entry was posted in Musings, Sketchbook, Textiles 1: A Creative Approach. Bookmark the permalink.